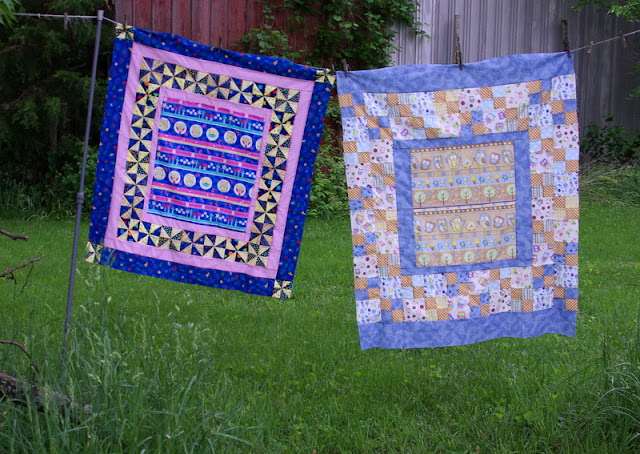 A few years ago I was given some little panels or center pieces. I've been throwing pieces of fabric I thought might go well with the panels into the box with the panels. I'm not good at thinking of borders for medallion type quilts so I've procrastinated on doing anything with the little box of panels and fabrics.  Then someone with the Sunshine Online Quilt Guild (SOQG) (a group that quilts for several different charities) suggested a panel challenge for May and since I usually like to challenge myself just a little I decided to dig in and see what I could do with those panels and bits and pieces.  Now my box is almost empty after making these two tops - #4 and #5. I'm going to use some of what is left in the box to piece some backings for these quilts.  Then maybe in June I will piece together some batting and then get them quilted and donated. MAYBE. 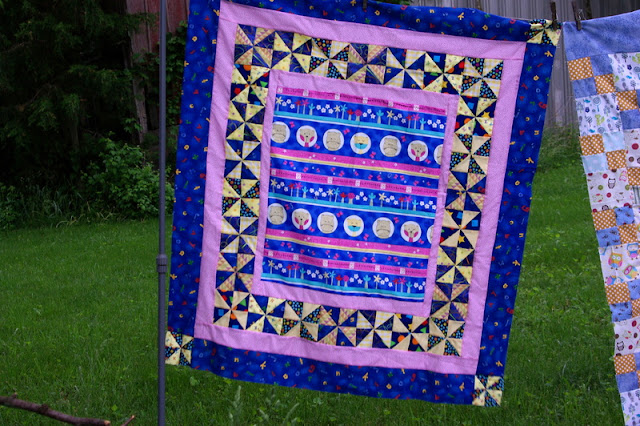 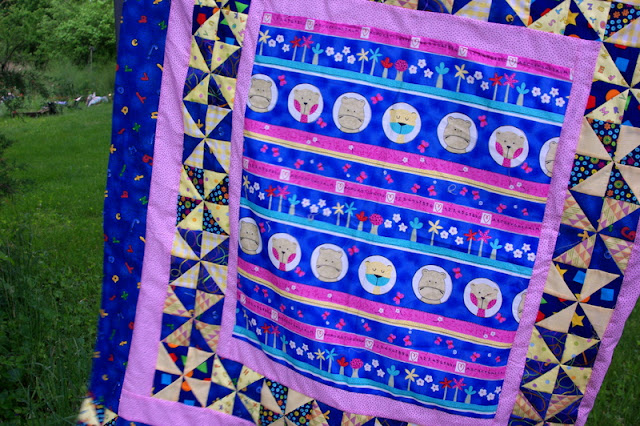 The panel had a few animals, the alphabet and some happy plants and mushrooms. I thought the pinwheels looked KINDA SORTA like some of the happy plants. So after adding a little coping strip in pink because there were pink strips in the panel I added pinwheels. I made the pinwheels in blue and yellow since they were colors also found in the panel and I had a few fabrics with letters and numbers on them as well as shapes and happy flowers so those fabrics went into the pinwheels. 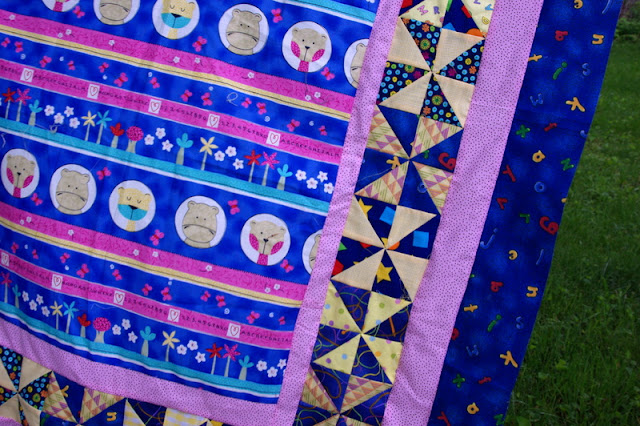 Then I made it easy on myself and added a couple of plain ol' borders - a pink one like the coping strip and a blue one like the pinwheels that had some tossed letters. 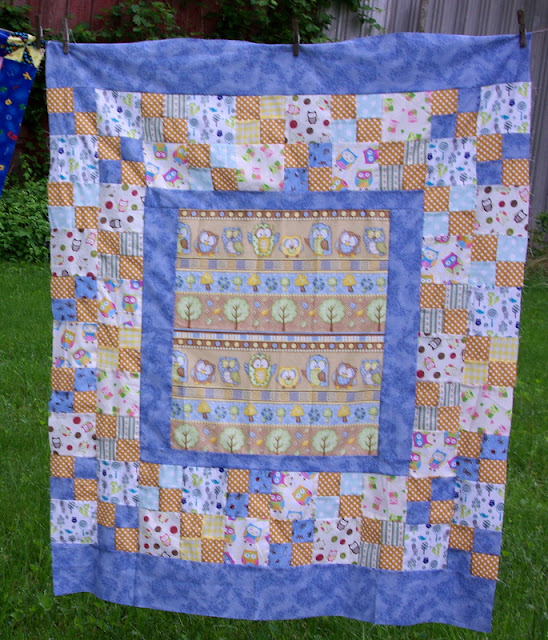 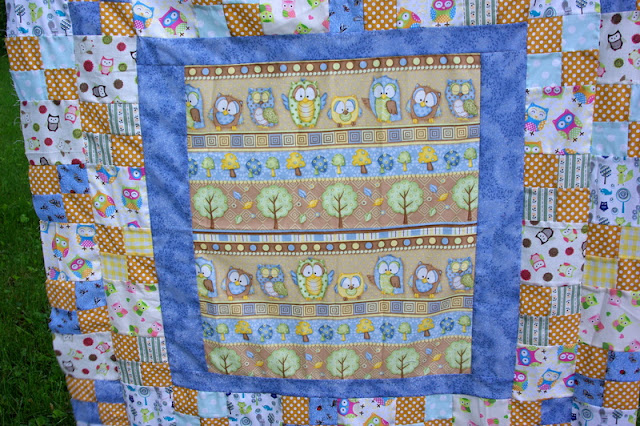 The center panel had owls, trees and mushrooms. 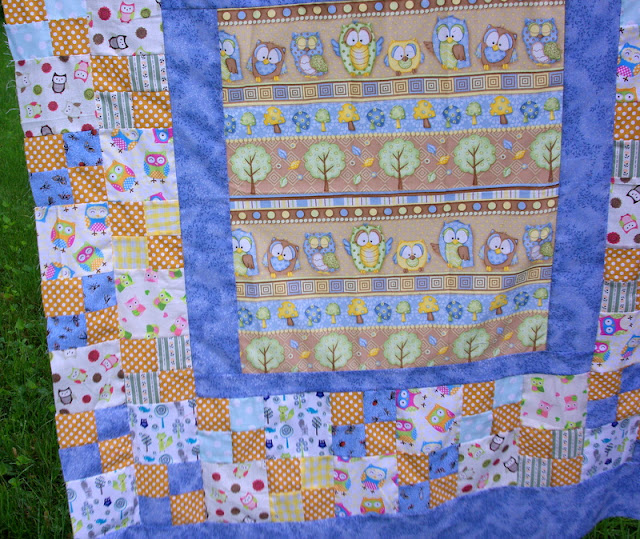 I added blue coping strips. That panel was a very weird size and my head hurt after figuring out the measurements of the coping strips. Let's say they involved 1/8ths.  Anyway, I had that light blue tone on tone fabric with branches in it so figured owls sit on branches so it should be okay to use. 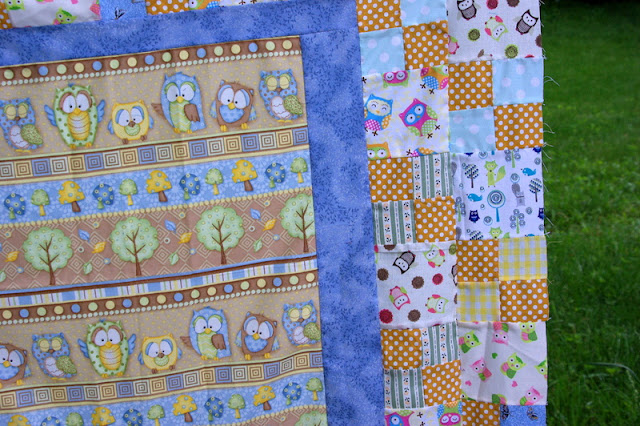 I also had a few 4.5 inch scraps and squares with owls left over from making a few quilts so decided to use those and alternate with four patches.  I used a constant light brown polka dot fabric for the four patches because there's a little strip with polka dots in the panel. The other pieces in the four patches were scraps that KINDA SORTA matched the colors in the panel. 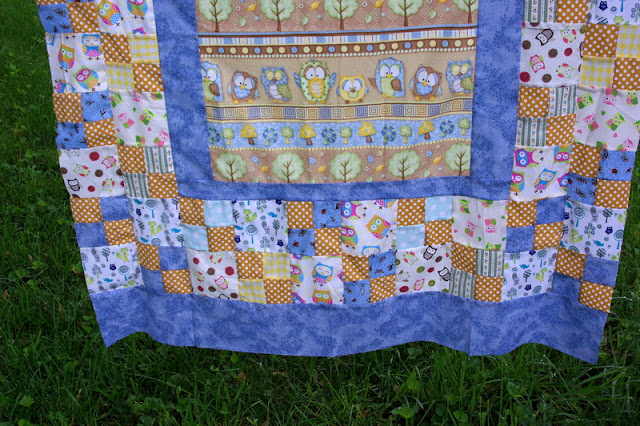 At that point I thought I was finished when the top reached 40 x 40 but then when I held the top up to admire my masterpiece it did not look right proportionally - probably because of the wider coping strip in the middle and shorter one on the bottom. So I added what was left of the blue branchy fabric to the top and bottom.
And sew it goes...
Finished or Not Finished Friday at Alycia Quilts
Posted by Cathy at Friday, May 27, 2022

Not good at thinking of borders? Hogwash. These little beauties are perfect!

Both great flimsies. Congratulations on turning those little panels into Baby sized tops. You have been very inventive. I know that you’re like me and find thinking of suitable borders for Medallion quilts is a challenge. But both of your ideas have turned out to be winners. Both tops are bright and eye catching with lots for Baby to look at and as it gets older, search out and name the different animals etc.

Well done!!! Kinda sorta certainly works in both of these!!! (and I am with you on 1/8th in measurements)

Really nice work on those panels; I find they always give me problems trying to find borders, sashings etc. too. I am going to use two of them to back my 36-patch pieces for my grand girls--I like using them this way...
Hope your Memorial day weekend is a good one hugs, Julierose

Such clever ways to use panels. You know I love your borders!
Thinking of you often.

You did a great job bringing the panel up to a bigger size. You make me want to see what panels I have hanging around. I don't have too many but I bet I could find one or two.

These are both so cute - the 1/8th measurement not so cute!

These are wonderful!! All of the fabrics you chose just enhance those panels so much!! they are adorable!