What Was In That Box? 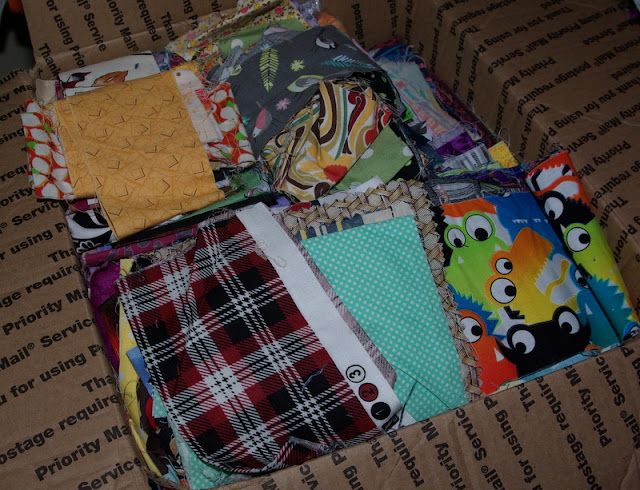 I used to let scraps pile up on my cutting table. When the table was overflowing with scraps so I barely had any cutting mat showing I would throw all of the scraps into a box to sort later. Now I am trying to use the scraps as I make them but I'm still in the process of emptying boxes of cutting table scraps.
We finally had some rain the last couple of days so it was a little wet for gardening (and I actually needed a little break from gardening) so I spent some time in the sewing room working on odds and ends. And I decided to tackle a scrap box.
I kind of neatened up the box a little bit for a photo shoot but this is the box BEFORE shot. Now it is empty. What follows is the story of how I emptied it. 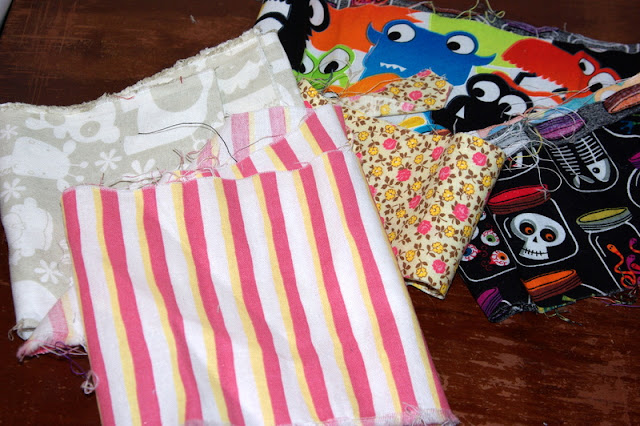 First I took out the long quilt back trimmings.  I put them into the... 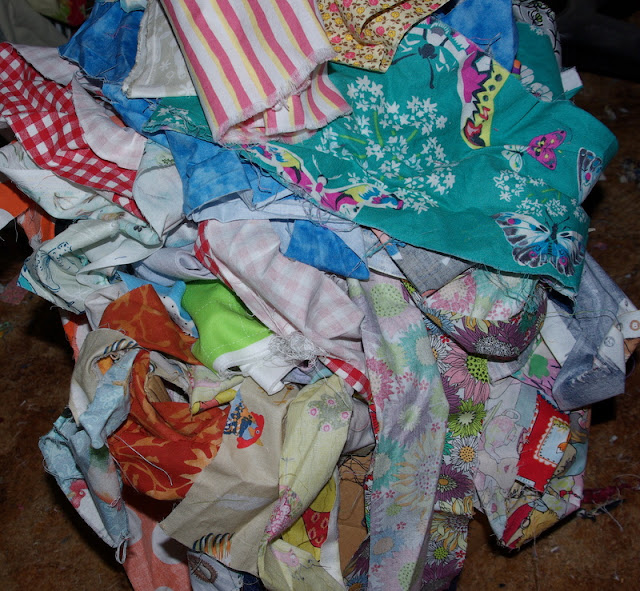 ...overflowing "long quilt back trimmings" box. I'll deal with them later. I usually sew the wider strips into quilt backs or cut them for bindings. If there are skinny strings they go into the string box. 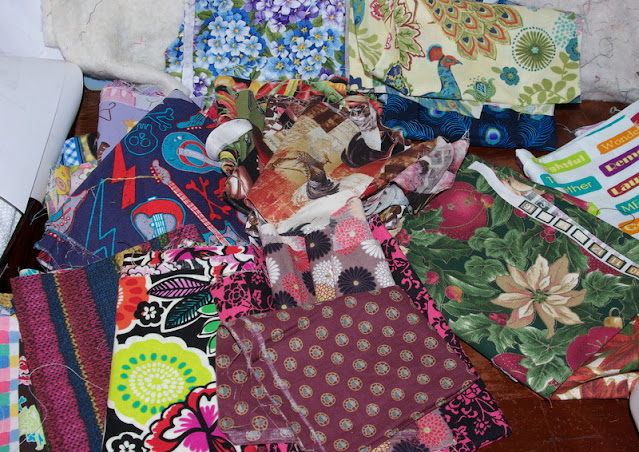 These pieces all have a bin or box they can call home. I put the Christmas pieces with the Christmas fabrics, the multicolor went into the multicolor chunk scrap bag, the novelty went into the novelty scraps, the peacock fabrics went to the peacock fabric scraps, the floral went with the other floral scrap chunks and so on.  Most of my Rainbow Scrap Challenge (RSC) blocks now come out of the scrap chunk bags sorted by color.  The RSC blocks used to come out of the scrap bins sorted by width that are now almost all emptied. 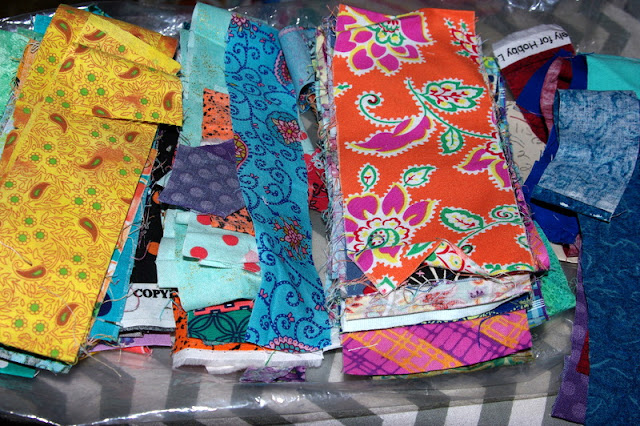 There was a big plastic bag full of these scraps left over from making a quilt but I honestly don't remember which quilt. There are 2 inch strips which went into the 2 inch scrap bin and the 1.5 inch scraps went into the 1.5 inch bin.  I emptied most of my scrap bins sorted by scrap width last year but I still have the 2 and 1.5 inch strip bins that I have not emptied yet.  Meanwhile I keep adding to them.  Then there was a pile of 3 inch width strips. That is a weird size and I've never had a bin for that size because I never seemed to have any scraps of that size. Well, guess what...while sorting scraps I've found a lot of scraps 3 inches in width. I've been throwing them into a little box as I find them and now all of a sudden I have a little box full. 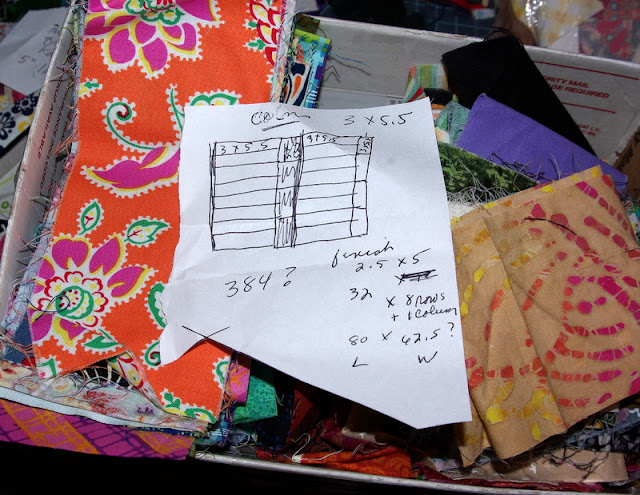 So I added the 3 inch width scraps to the 3 inch width little box and thought I had better decide on what I should do with them. How about a Chinese Coin quilt? Pieces cut 3 x 5.5 sewn into columns and then separated by 3 x 5.5 pieces sewn together and oriented the other way? I'm probably not describing it right and my drawing is a little funky but roughly I THINK I will need 384 pieces. for a 62.5 x 80 quilt.  Anyway...this is a story for another time. 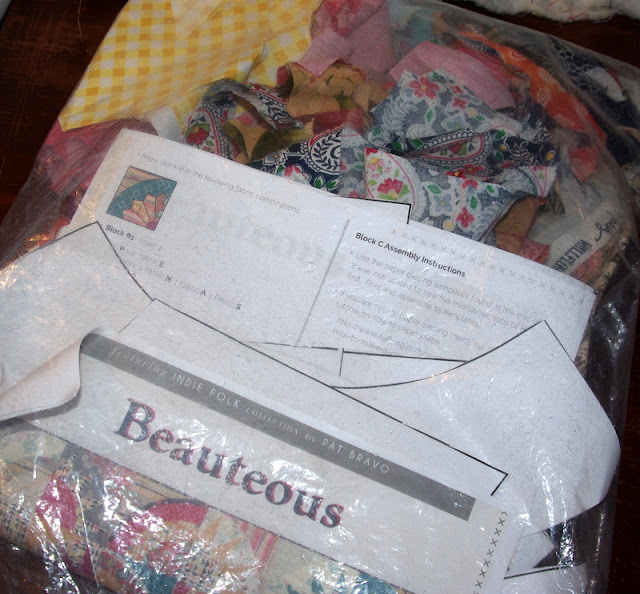 There was another big bag of curvy and other odd shaped scraps left over from making a NYB type top called Beauteous (pattern by Pat Bravo).  Those are going into one of my many crumb boxes to be used next year to make lots and lots of different crumb quilts. Again, another story for another time. 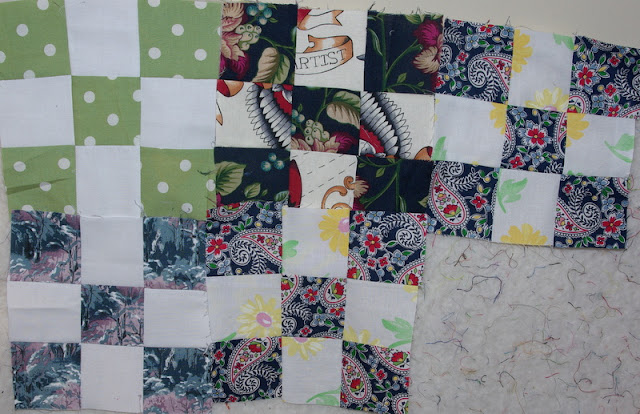 Ok. So with all that stuff cleared out I started to make blocks for the Parts Department. I made some 6 inch Nine Patches out of 2.5 inch scraps... 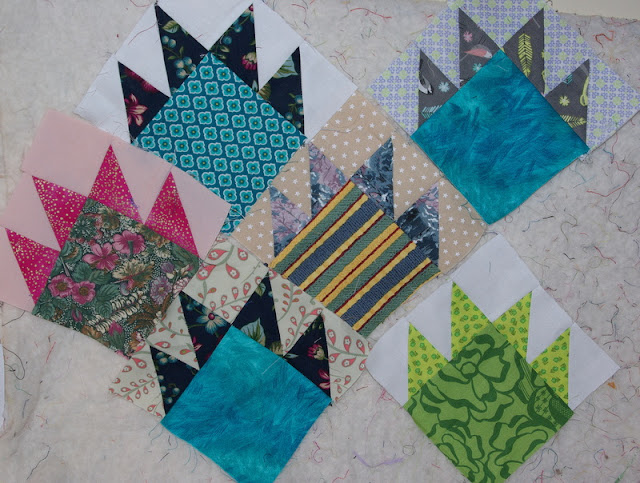 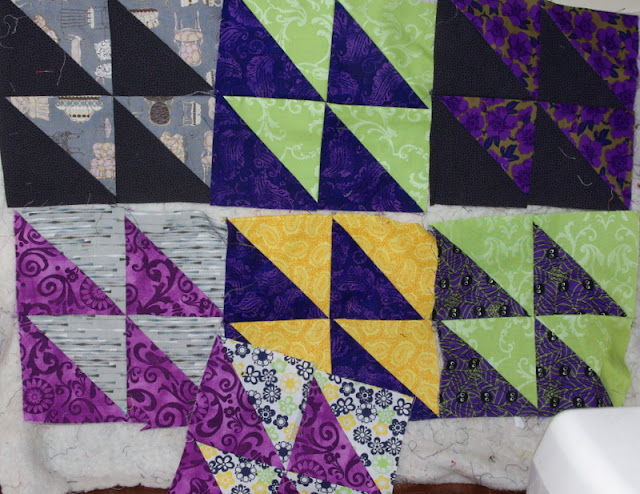 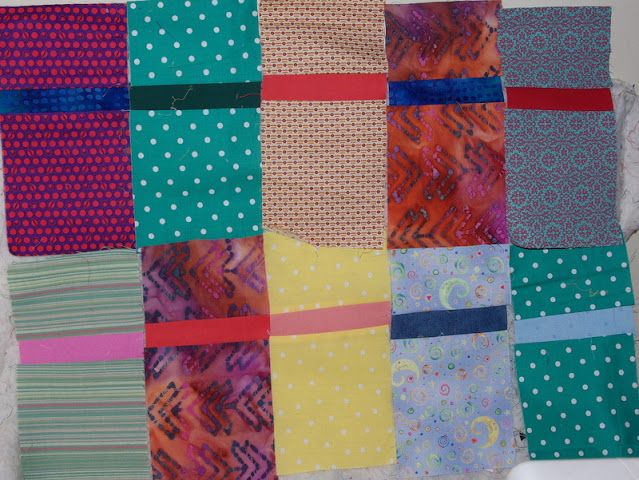 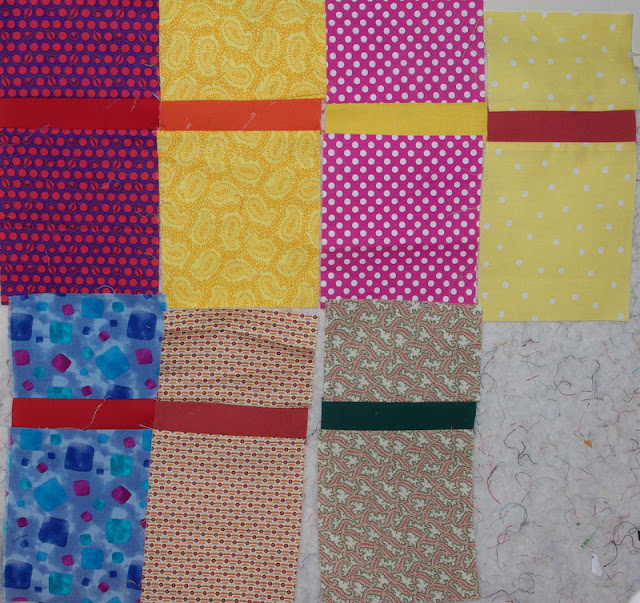 ...and some Horizon blocks out of 5 x 9.5 scraps.  I'm trying to have some sort of PART in the making from each size of scrap I make in the future so I can use scraps as I make them. 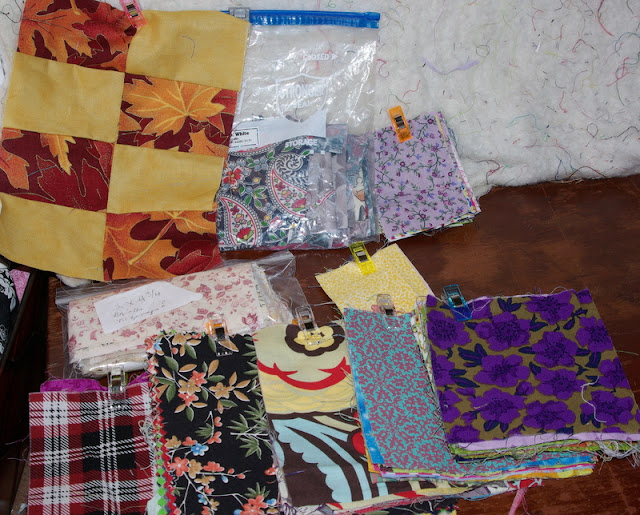 I also cut squares (well, there were already some cut squares in there). If there was enough of a 2.5 or 3.5 scrap for four pieces 2.5 x 3.5 then I cut those pieces for that block I have attached to the baggie (the one with the leaves and yellow pieces). I there wasn't enough scrap for four matching pieces but enough for one piece 2.5 x 3.5 then I cut those for a quilt in the making. There was a little pile of neutral scraps 2 x 4 3/4 and I wasn't sure what to do with those so I bagged them up while I think about them. Maybe little lozenges or bricks???   I also cut several sizes of squares to add to my Squares bin and for later use - 6.5, 6, 5.5,5,4.5,3.5 and 2.5. 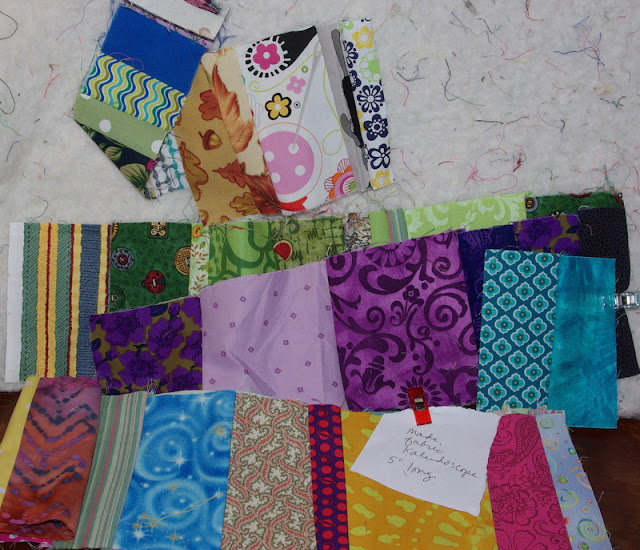 The pieces that were less than a square got sewn into strips. I have an overflowing box of different colors and widths of strips that I really need to make into quilts.  Now I'm going to sew the "less than a square" pieces into strips as I find them and that won't be by color so that will be another whole box of strips I will be accumulating.   Oh...and any 5 inch width of scrap will get sewn into strips and later made into a kaleidoscope quilt.
One down and I think four large flat rate boxes to go!
Posted by Cathy at Monday, June 21, 2021

You are really getting organized with your scraps--I am trying to get a handle on doing this--cutting sizes I may use in the future...
hugs, Julierose

I love seeing your process in action! No wonder you get so much done!
I was cutting 3" strips for a while when I was making my triangle stars quilt, but as soon as I was done with that I sliced all the leftover 3"ers right down the middle and made 1.5" strips out of them. Between 4-patches and 9-patches, I never have enough 1.5" squares and strips!

Well done on organizing your scraps! I had that 'problem' some years ago, spent days cutting and organizing scraps. From that day I decided to sort and cut leftover fabric after each item I finish. So far so good.

That's QUITE the system you've got there, Cathy!!!

Wow. I've got as far as putting the colors in separate bags and thot I was doing good! Lol

You are so organized. I'm drowning in scraps and fabric and can't seem to get on top of it. Besides, I just don't have the space for anymore storage bins, and organizing is so time consuming. Do you make house calls?

However long it took you to develop the “Cathy Labath Scrap Management System” it was totally worth it! By feeding newer pieces in with the older, your scrappy quilts become amazing. Good luck with the remaining boxes yet to be processed.

You are so organized. No wonder you get so many quilts sewn. It rained here today, too. Hooray!

I love reading through your methods of how you sort out boxes of scraps. Great ideas.

Great organization! Good progress to make it so things can be found now.