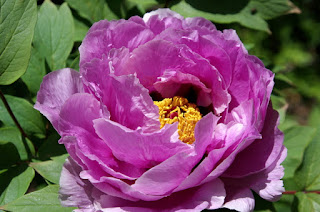 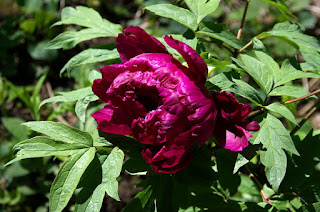 It's Wednesday and time to wander down the garden paths.
The Tree Peonies were ravaged by deer and rabbits during the winter and since they bloom on old wood I have very few blooms on my four Tree Peonies this year. 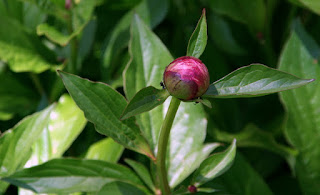 Usually after the Tree Peonies stop blooming the Herbaceous Peonies start to bloom. 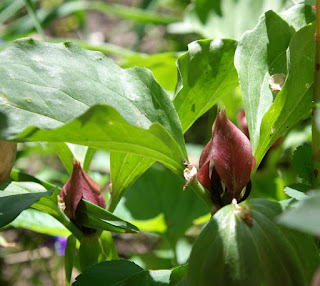 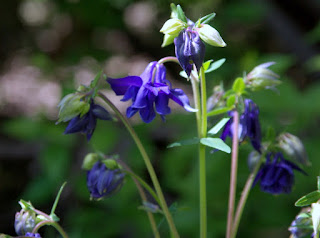 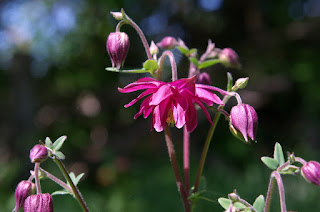 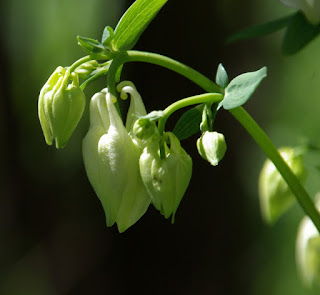 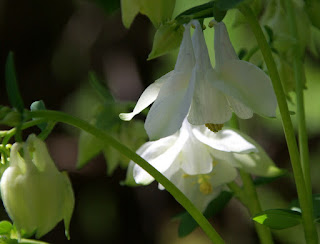 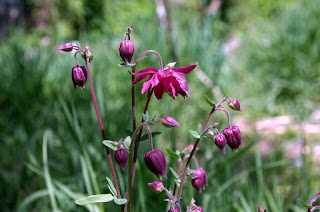 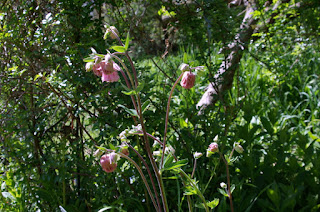 Several colors of Aquilegia (Columbine or Granny's Bonnet) are blooming in different places all over the flower gardens. I started these perennials from seed several years ago. I just love the delicate flowers. 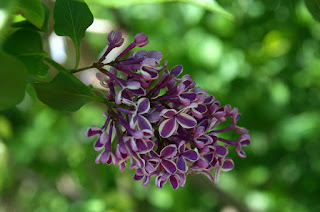 The lilacs are blooming too and the air is filled with their fragrance. This one was destroyed several years ago when a big tree fell on it. I took a cutting of it and finally it has bloomed this year. Lilacs bloom on three year old wood. 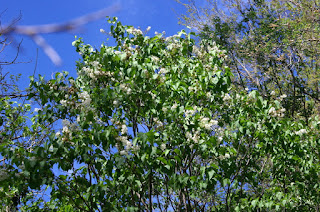 I have other lilac bushes that all need a trim. Most of the lilacs are up too high now for me to cut for bouquets. There are several purple varieties out front that bloom one right after the other. This white one near the back fence line at the edge of the flower garden came from a cutting I took from the homestead my great grandfather settled. The farm had been in the family for over 100 years when my dad's generation sold it. I have wonderful memories of summers spent there as a young girl and this lilac reminds me of good times.
I have read there are several different ways to prune lilacs -- cut away a different third of the bush every year for three years or cut to the ground and wait three years for blooms. Not sure which method I will try but I think I should have been pruning in April before they bloomed. 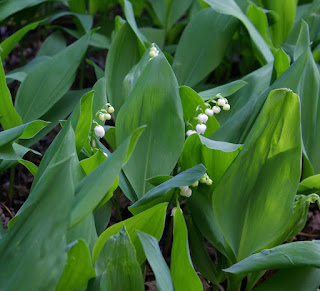 Lilies of the Valley bloom just outside the back door and the fragrance is wonderful. 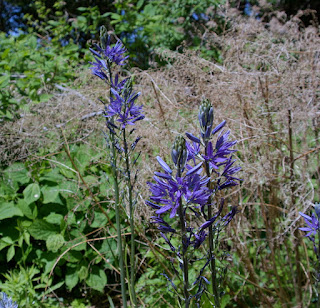 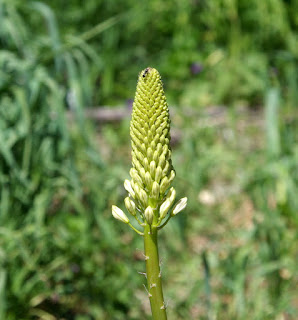 I also planted some Foxtail Lilies last fall and so far I'm not impressed but maybe I will be later when the buds open. 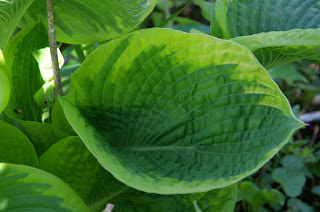 The Hosta leaves are starting to unfurl. I bought a whole bunch of Hostas with different leaf colors and patterns over 20 years ago on clearance. I have divided them several times. They add color to the shady areas. 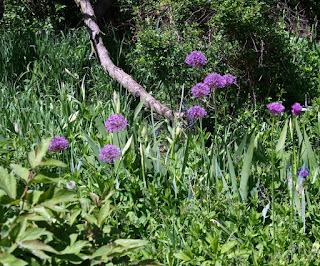 The Allium seem to magically move around the flower garden so I never know where they will end up. I was reading about Alliums last year and was surprised to learn there are so many different varieties prized for their blooms. I may have to start a collection! 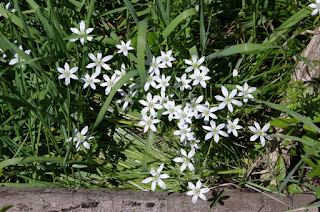 The last few years I have not seen any Star of Bethlehem flowers but this year they are everywhere. Normally I think deer and rabbits eat the flower buds and that is why I rarely see the flowers.
That's it for now in the flower gardens now into the veggie garden... 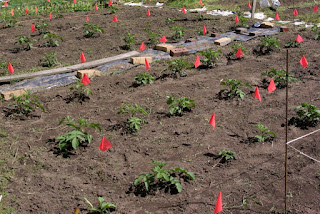 I planted my potatoes on Good Friday and I think I have 50 potato plants now of two different varieties - Yukon Gold and Kennebec. 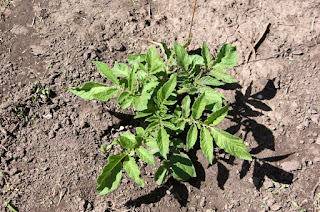 Now it is time to start mounding up lots of dirt around them. 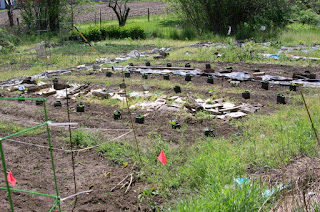 Following the rows of potatoes are several rows of carrots and beets. After that I have rows of cabbage, broccoli, cauliflower and brussel sprouts I started from seed in little milk jug greenhouses on the deck (winter sown). 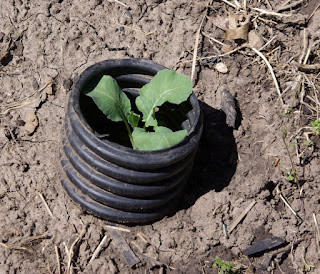 I put a piece of old plastic drain pipe around them for awhile to keep rabbits from nibbling. I leave a few plants in each row without pipe around them and if they don't get nibbled right away then I know there probably aren't that many rabbits around. That also means the barn cats are earning their room and board. 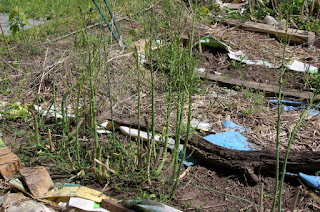 We have been eating asparagus two or three times a week now for several week and have had our fill as have family and friends who like asparagus.  We don't like to eat it frozen or canned so have now quit cutting spears. 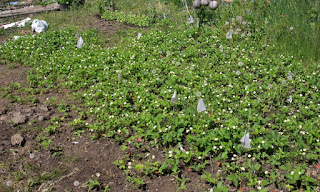 And guess what!!!! I have lots and lots of strawberry blossoms!!! Remember a few weeks ago when I stuck plastic forks all throughout the bed? Well, those forks must be keeping plant and blossom eating critters away for now although when I was weeding around the bed the other day I kept hearing a squirrel scolding me. I think the squirrel thinks I was trespassing in his or her strawberry bed. 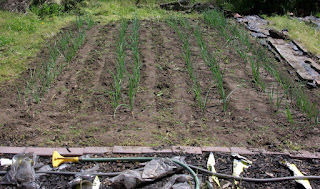 I planted the onions around the same time I planted potatoes. Some of them we will eat as green onions and others will make some nice onion rings later in the year. We like onions in almost everything but our dessert.
I also have lettuce, mustard greens and radishes growing. The spinach was old seed so I don't see much of that germinated. I also have snow peas and sugar snap peas growing along the fences. Our last frost date is May 15 so after that I will be planting tomatoes and peppers started under lights in my sewing room and will plant seeds of a couple of types of beans, cucumbers and squash.
Posted by Cathy at Wednesday, May 12, 2021

What a lovely walk. Thank you. I smelled lilacs & honeysuckle on my morning walk today with Gracie, my dog. Heavenly! Your vegies look great and, when they're ready, will be delicious. I just love fresh veggies that I've grown myself although I don't do as much as you!

The flowers are just gorgeous - and holee cow - look at your garden!! It looks so great! We haven't planted yet, so I am loving seeing what you did!!

What a fantastic yard! It makes me jealous:)

Wow! You have a wonderful garden. I don't know where you are located but my peony plants are just starting to emerge. They will not be flowering until late June.

I enjoyed wandering through your garden with you. You certainly have lovely plants and trees in your garden. I love Granny’s Bonnets too and I have a few here in our UK garden but our New Zealand garden was full of them, planted by the previous owner. Lilacs trees always remind me of my family home. We had a lovely mauve one and a white one which Mum used to cut for the house.

Beautiful flowers and garden! I am envious. What a shame about the asparagus though. I wish I lived closer...

Beautiful flowers and veggies. When will the picnic begin? You made me hungry for the good stuff!

I enjoyed the walk around your gardens for sure! It seems that you are just ahead of me...my lilacs are blooming, but not the peonies yet. I do have lily of the valley and narcissus blooming like crazy, and it does smell divine! :)

Thanks for the garden tour. You have lots of variety. After a brief warm spell in April, we've been cold and rainy. Frost warning every night for the last 5 days. I don't think we got any, but it's been in the low 30's each night, so blooms have bee delayed. It never seems to bother the weeds, though.
Pat

Thank you for showing us your garden! Beautiful flowers, all reminds me of Norway. Many of those plants don't grow here. That's a lot of vegetable plants, and lots of work too. Nothing tastes better than homegrown vegetables!

I always love walking through your gardens with you. We have toyed with the idea of planting asparagus next to our rhubarb, but since we’re doing a lot of soil amending and prep this year (overdue), it won’t happen for now. Your info on the alliums explains why mine move around the yard the way they do. I thought I was going crazy! (Well maybe I am, but at least the surprise alliums have nothing to do with it).

Juat wanted you to know how much I enjoy your garden posts as well as your quilt posts. Those are my 2 loves as well. I am in zone 7 so my vege garden has beans 6 inches high. I live in town and my gardens are small but enjoy them immensely like you do. Thank you for the posts.

I love seeing all your garden goodies! Our lilacs are budding up but not ready to bloom yet - I'm so looking forward to that!
Looks like all those forks paid off in the strawberry beds. Whoda thunk it?

Beautiful pictures from your garden. xx

Your garden is fabulous! I am still wrestling my new plot into some sort of shape, so not many flowers this year. In my last house I had a tree peony which was one of my favourite things until a man came to prune a tree and dropped a branch right on it. Snapped it off at the ground. He didn't get to finish that tree - I threw him out!