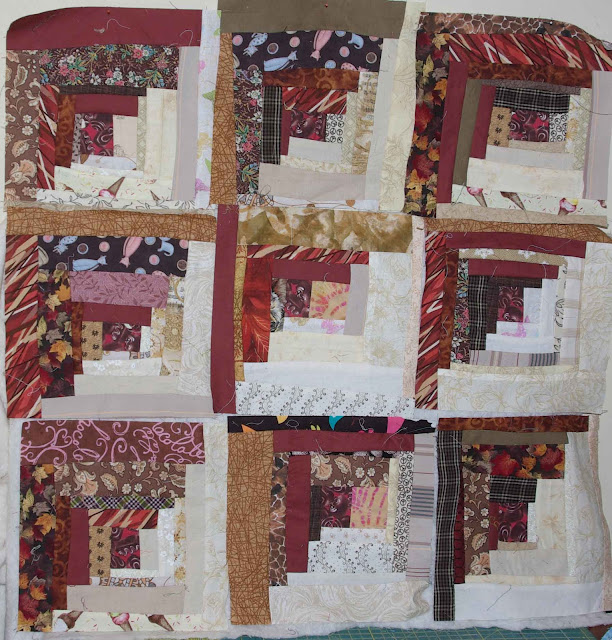 Brown is the color of the month for the Rainbow Scrap Challenge.

My sewing machine is in for repair so I got out my old Kenmore from the attic.  My 1/4 foot doesn't fit on old Ken and I'm not real accurate without that foot because I tend to sometimes veer off course sometimes. So, I sewed up a few blocks this week that don't take much precision like these wonky log cabins.  They are nine inch blocks and I think I might have enough brown strings to make 30 blocks for a donation quilt.   And if there's not enough browns for 30 blocks I could probably mix in some black ones and dark blue ones.  We shall see where the scraps take me. 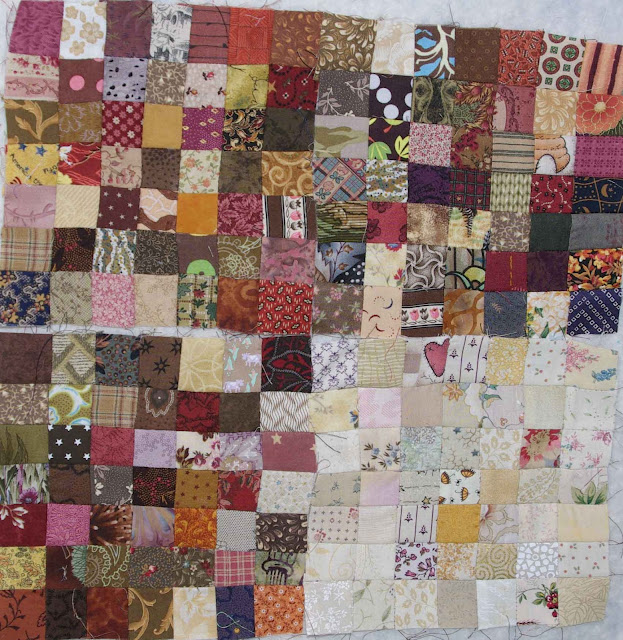 And I made four 49 patches from 1.5 inch scraps.  I think cream colored fabric is just light light brown so usually mix it in with my brown 49Ps but this time I had enough brown scraps and didn't need to mix in very many cream pieces so they became a block all their own.  I have a bunch of brown 49Ps I've been collecting for a Plain Brown Wrapper quilt.  I think the cream one will go into the low volume pile. 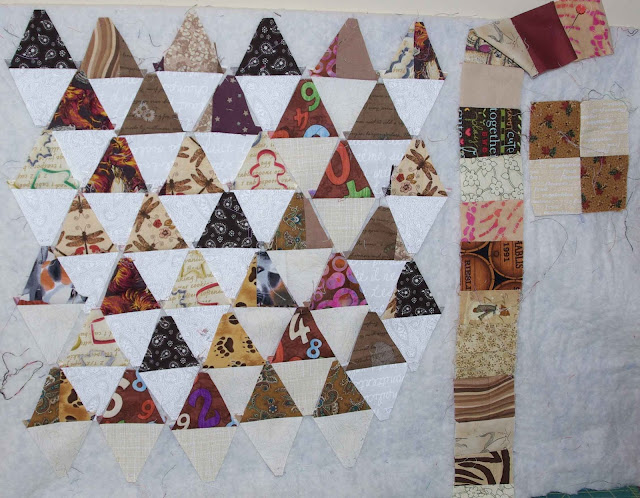 And finally, I took all of  the shorter pieces of brown 2.5 inch scraps that could make at least one pyramid cut, sewed those pieces together end to end to make a couple of long strips and then followed the pyramid quilt tutorial on the Molly Flanders blog.

The long 2.5 inch pieces will be made into HSTs and then Depression blocks.  I'm saving the HSTs for when I get my plain Jane Janome back from the shop.

The really short 2.5 inch pieces I just sewed end to end to get that strip on the end.  Not sure what those strips will become.  And I found the makings of one four patch in my scraps I will throw in the four inch kitchen sink pile of blocks.

Everyone will be cooking up brownies with their scraps this month. Some might even have pink icing.  Go check for yourself.  You never know what you might see each ScrapHappy Saturday.

I really like your triangle quilt and the pieced border.

Wow, you have been very busy this week! Great projects

You're shared so much beautiful inspiration in just this one post. All of these are so beautiful.

You used a lot of those brown scraps. Your log cabin blocks remind me of one of those checker board cakes. Have you ever seen one of those?

For someone whose sewing machine is in the shop, you've certainly gotten a lot done. Old Ken got a workout, accurate or not.
I always love to see all your scraps. You've got such a wonderful collection and such a good eye for combining them.

You have lots of pretty brown blocks. I see I am not the only one using 1.5" squares.

Look how much you already completed. Nice job! I haven't even pulled out my bin of brown scraps yet. I hope to today!

You've done a good job using all those brown scraps. Hope your Janome comes back soon.

Only three projects this week? Not having your Janome is clearly putting a dent in your productivity. ;)

Love all your blocks and projects! The browns are so pretty and rich. Thanks for the link to Molly Flamders and the pyramid quilt tutorial. I've been wanting to try an equilateral triangle quilt.

SEW glad that you put your Kenmore to work this week! Those Log Cabin blocks were the PERFECT choice for a donation quilt.

I love seeing the wonky log cabins, they have so much eye appeal!

You have got a lot done with brown fabrics. Thanks for the link.

I'm constantly amazed at the scraps you pull out weekly. What a great group of blocks here. I love the name light and dark chocolate... Although I'm a dark chocolate fan myself!

So many great brown blocks this week. Hope your machine is back soon.

'Cooking up brownies with pink icing!' LOVE This! You have some beautiful brownies in process. I especially love the wonky log cabins - I need to make another one with all my scraps - much easier than cutting to size =)

Wow, you have found loads of brown scraps. I think I want a machine called 'Old Ken'!

Lovely chocolate browns and what a stash of them you must have.