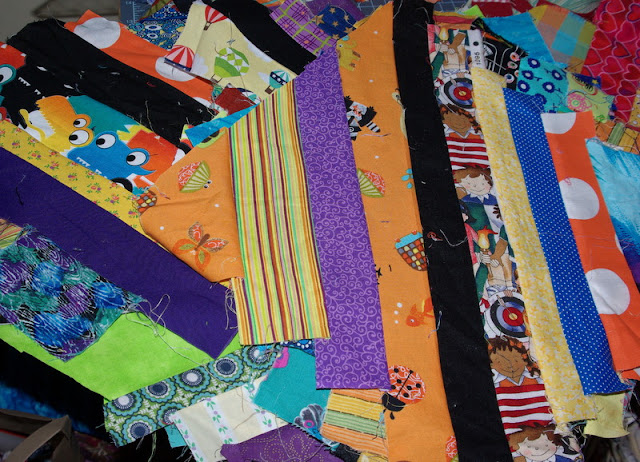 I've completed a couple of string quilt tops in the past few weeks; however, that didn't really seam to make much of a dent in the boxes of strings.  So I've been doing some mindless string sewing and have completed a few sets of blocks that need trimming and the papers removed.

Strings around here are different from strips. Strings are usually the result of quilt back trimmings or wonky fabric ends or long  scraps leftover from a project that is not in a size of strip I save and those are usually between 1.5 and 2 inches in width.

I've been using newspaper cut 10.5 inch square for foundations in some of these blocks. I'd rather remove papers than spend money on fabric foundations.  A 10 inch finished is a nice size for the smaller donation quilts I make and set 4 x 6.

The first set of 24 ten inch blocks consists of a center black string and brights. I had a lot of black strings of different widths I laid on the diagonal and then I sewed bright strings on either side. 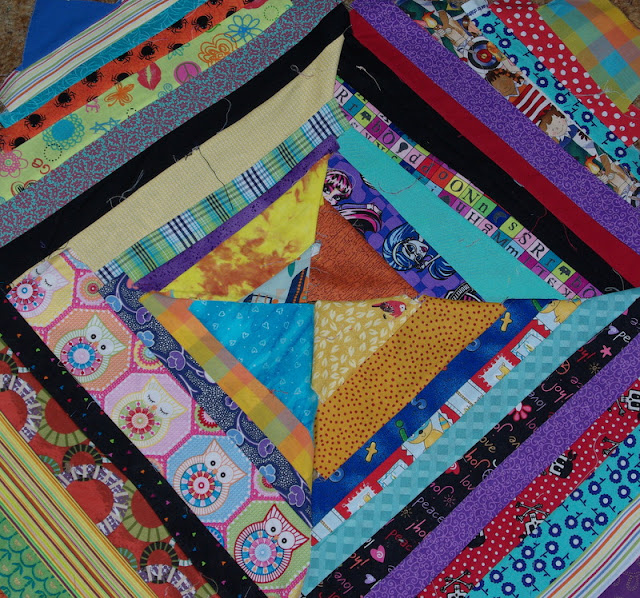 When trimmed they will be sewn together and look something like this. I don't normally name donation quilts but I think this might have to be called "The Eyes Have It" because there sure are a lot of scraps in this one with creatures peeping.  Thats' probably a better name than "Sleep With One Eye Open". 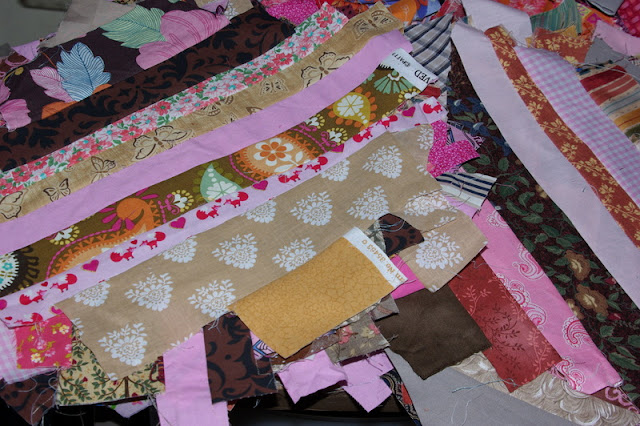 The second set of 24 ten inch blocks are browns and pinks. 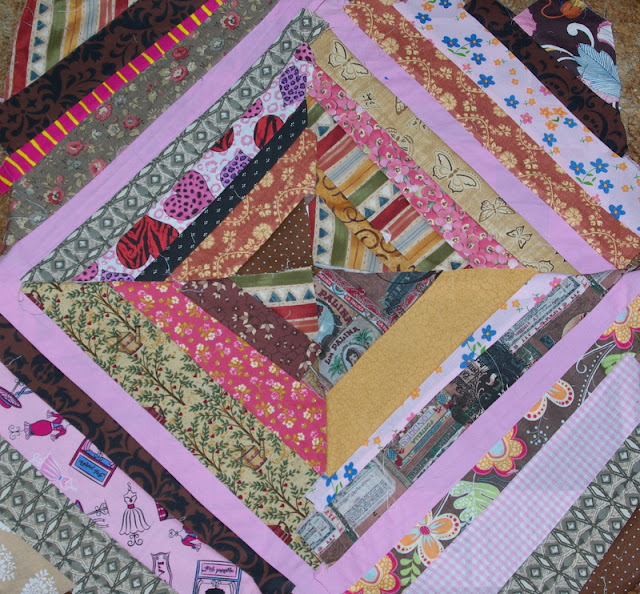 When I get around to trimming and sewing them together they will look similar to this. 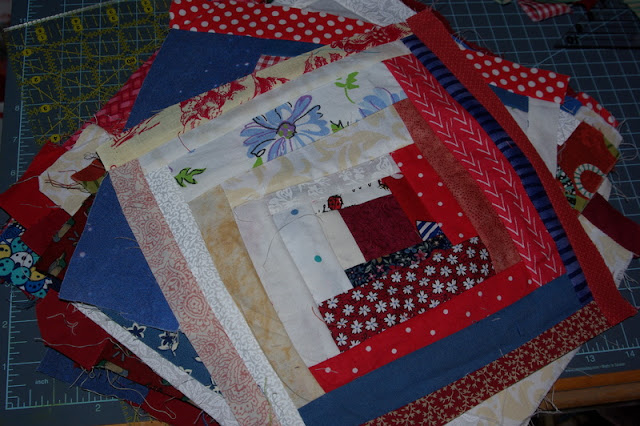 I had made 24 nine inch Wonky Log blocks in red, white and blue. My goal was 48. These take short and skinny strings so  I put them on hold and made the blocks in the two above quilts before I proceeded on with these and cut long strings into shorter lengths while making these. I need to evaluate now if I have enough red,white and blue strings to make 24 more blocks. 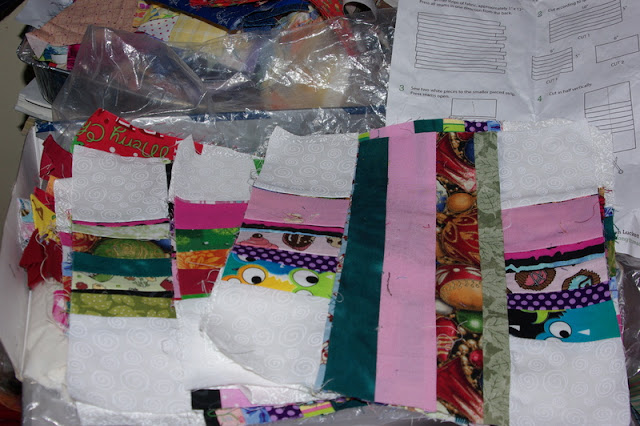 And speaking of shorter and skinnier strings...I have a set of 11 ten inch blocks (aka UFO)  I made a long time ago when I only had a few strings to work with. I put them on hold until I gathered more string scraps and then forgot about them. Now that I have some bright shorter and skinnier strings I think I will make 13 more and then I will have a complete set of 24 for another donation quilt. I might have to make 14 of them though because I see Santa Claus in one of the blocks and I don't put holiday figures in donation quilts. Maybe I can just replace the Santa scrap? and not make a whole new block. 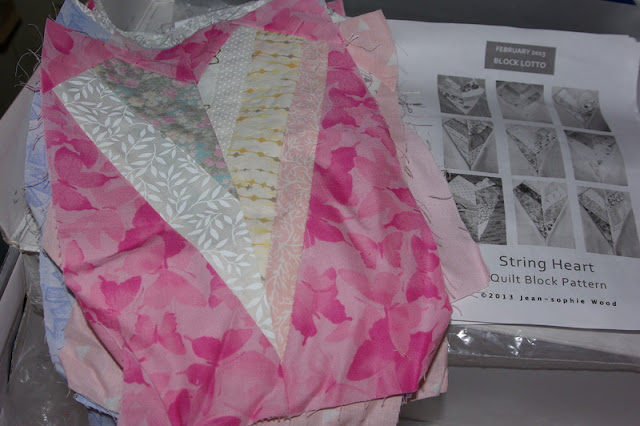 Oh Scrap! at Quilting is More Fun than Housework

So many string ideas! I love all your different projects and always get lots of good ideas from you! Like you, I have a lot of low volume strings, and I plan to make a couple quilts out of those in the coming year.

What a fun time you have had with your various coloured strings. They will make some great donation quilts. Like your idea of making a low volume Chinese Coin quilt with the Heart blocks turned into columns to intersperse with the pale columns.

Love all your stringy bits! You do such wonderful things with string blocks - can't wait to see these quilts when they're done! (Or even when they're not done yet!)

I like the idea of mixing the string heart blocks into a coins quilt - good way to use them and not have to store them in a box.

I love that kind of quilts.

What a fabulous batch of String Quilts you will have when all of these block sets are complete!!

I have way too many strings, but, not enough in a controlled color grouping, maybe I need to look again. great projects

So many wonderful string ideas! I find I have a hard time choosing just one, but I know I don't have to limit myself! I have that owl fabric.

Lots of bright, fun string blocks here! I waffle about holiday fabric sometimes. I know some of the images that strike us as really "Christmassy" could be quite neutral in another culture. Holly leaves, for instance, or bells. Santa is pretty unambiguous, though :)

What a timely reminder for me. I've been deliberately ignoring my scrap bag and the strings are overflowing. I've been thinking about how I want to organize them for string quilts. Adding the hearts to Coins sounds like a good way to use them. I think they will contrast nicely.
Merry Christmas.

That idea to use those heart blocks in a coin quilt is brilliant!

Hope you had a wonderful holiday Cathy!