It's a Flimsy! Camouflage 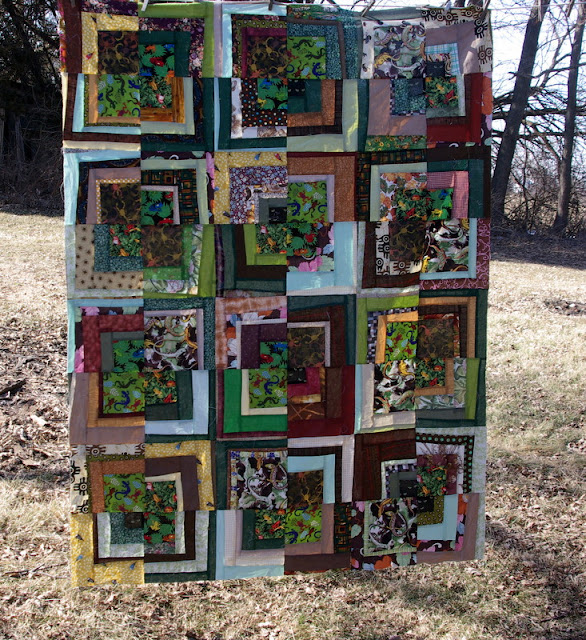 48 x 64
Camouflage
or maybe
It's a Jungle Out There 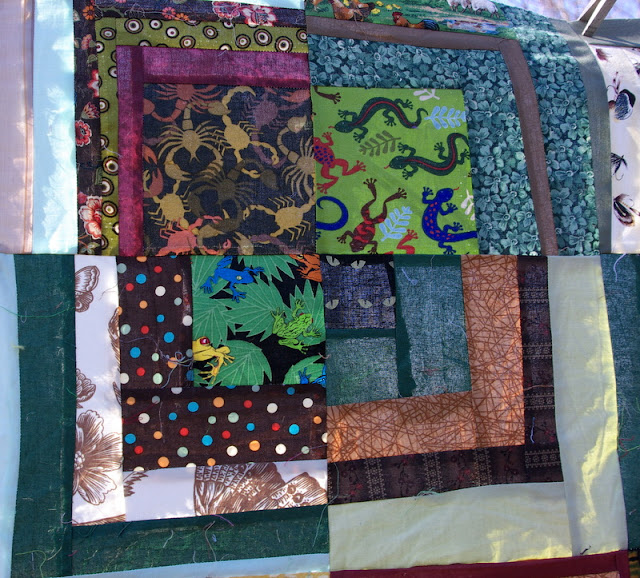 While I was quilting a big quilt on my DSM I took a lot of breaks from quilt wrestling and switched to an old machine and made Housetop or Quarter Log Cabin blocks from the box of brown, green and a few yellow strings.   I also added in a variety of green and brown critter fabrics  for the centers- odd bits and pieces left over from bug jar quilts, I Spy swaps, etc.    When I found I didn't have 48 pieces of critter fabrics I threw in some glow in the dark eyes from the Halloween fabrics. 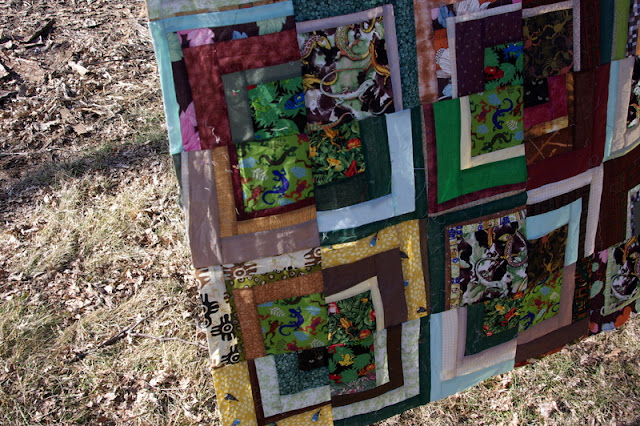 I originally intended to make 10 inch blocks but due to a very stupid mistake I ended up with 8 inch blocks.  I didn't figure that out until all blocks were made and I was at the square up stage, darn it.  I was thinking a 60 x 80 quilt would be a nice size donation quilt for a big guy but now it's probably a nice size for a little guy. 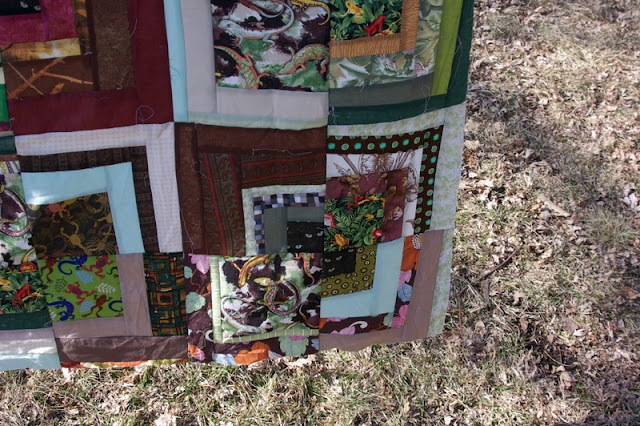 In order to have the critters in the blocks oriented correctly I first made 12 top left blocks, then 12 top right, then 12 bottom left and finally 12 bottom right.  Then I assembled them into blocks of four blocks and finally into rows and columns 3 x 4. 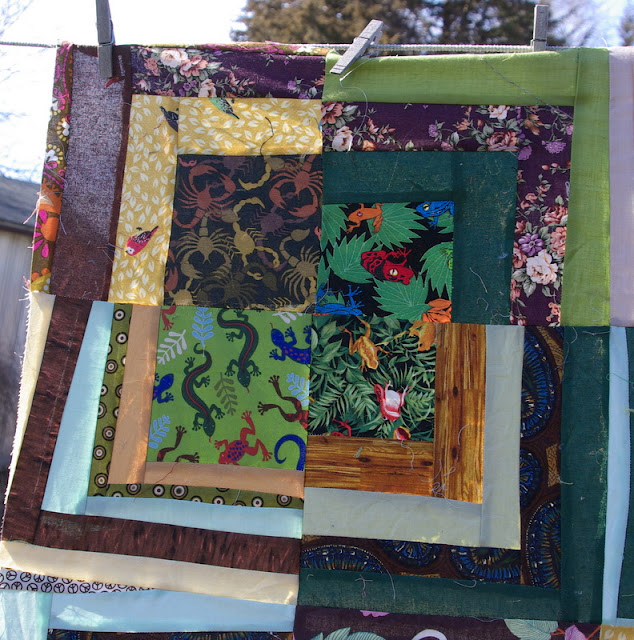 I see one block of four with some upside down frogs I didn't notice until I took these pictures. It bothers me enough to rip it out and orient it correctly.  The bird string ended upside down too. 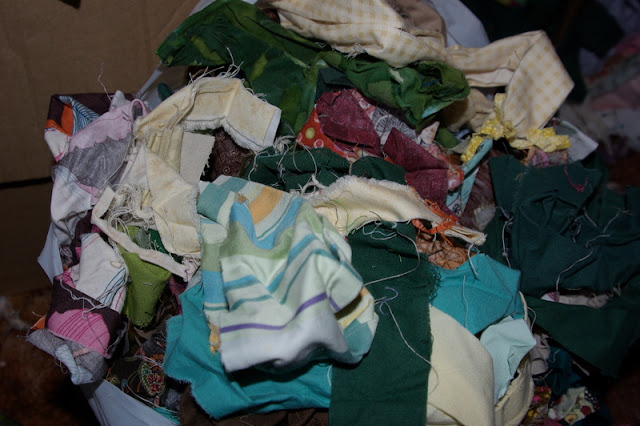 There might be another quilt in the left over in this assortment of strings but I think I'm going to re-sort again and add them in to different assortments - maybe add a few red and orange strings for a fall themed string pile.  I still have lots of strings to use.  A lot of these pieces are trimmings from quilt backs or odd sizes from the very end of a piece of yardage.

Using green strings was my Rainbow Scrap Challenge challenge of the week.

Math can be tricky, good thing that quilts can be any size.

Oh, I like "It's a Jungle Out There" much better than Camo. Super good use of a lot of different strings!!!

Reeeeeallllly different, but it does grow on you! Good job on getting it together. Sorry about your block size but it still works.

I always have fun looking at the great scrap pieces you have your blocks! A little guy somewhere is going to love this one!

It has to be "It's a Jungle Out There"! With so many different fabrics there, I didn't notice that a couple were not 'right side up', but I understand why you would want to correct them. I was the same way with the birds and flowers in my Texas Wildflowers quilt. ---"Love"

What a fun quilt, great fabrics.

Awesome quilt for a boy! I vote for “Its a Jungle out There” too.

There's NO WAY that I would have ripped out upside down frogs. My view is that there are FOUR sides, so if elements are oriented differently, it just doesn't matter which side is up!! :o))

It's a Jungle Out There! Perfect name!
And I'm pretty sure that frogs aren't concerned with which way is up...

Brilliant use of your green strings and scraps. Love the way you combine organisation with creativity. A whole mass of bits of this and that triggering your creativity and then your organizational skills come in to play: 12 x top left corner blocks, 12 x right corner ones ....... great!

Ooh! Love how the lighter strips make the blocks pop that much more! What a striking quilt. It's funny how certain things drive us crazy and we won't rest until it's fixed. Other things we don't even concern ourselves with!

I would have ripped out the frogs and restitched them too. That would have driven me crazy. That quilt looks a lot like a Bento Box one that I made. It's a Jungle Out There gets my vote too.

This is the first I've seen of this quilt! It must predate my time as one of your followers? Or have you been stitching it in secret? Anyway, I think it is really cool! Some little guy is going to love all those critters. I've never seen scorpion fabric before, and the glowing eyes are awesome. You have THE BEST scraps :)

Definitely a jungle!! You have a good selection of fabrics there.

I like the way the colours have worked out a lot: in your pictures some of the browns read as almost plum-coloured, and the lightest strips move my eye around nicely.The whole thing about orientation is odd isn't it? I wonder why we feel the need to have things facing the right way (I do it too).

Wow! That’s some great string use.