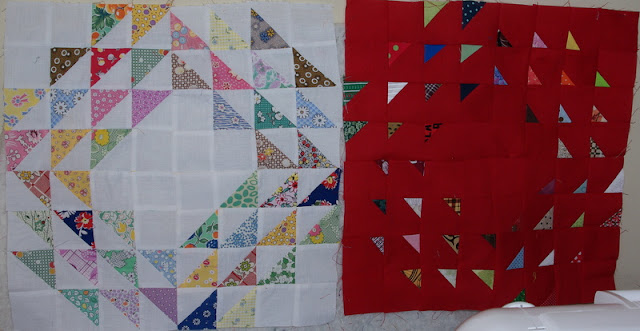 Ocean Waves and Confetti Waves
Both are 16 inch blocks
The one on the left is a traditional ocean waves block made with 30s scraps and bleached muslin.
The one on the right is the same block layout except I used waste triangles on red instead of making HSTs. 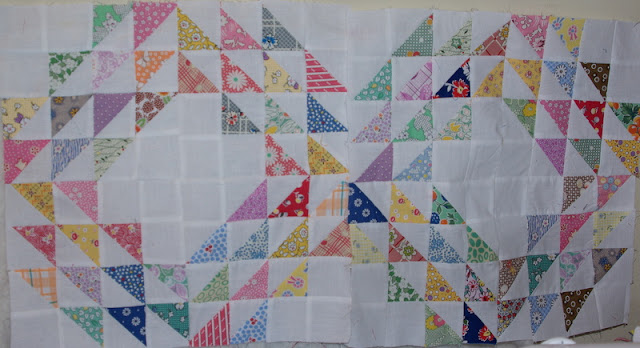 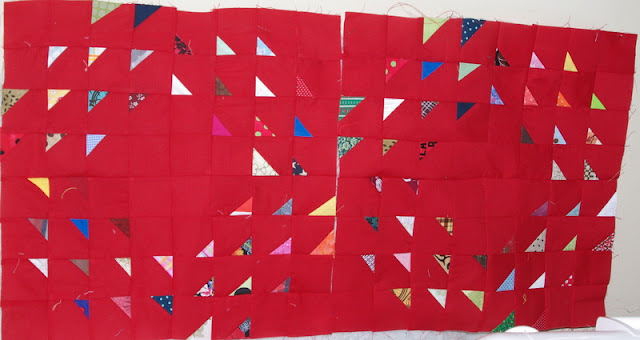 Making waves and using scraps.
I should be wrapping presents but I love sewing scraps and hate wrapping (or even bagging) presents.

Oh, you're a person after my own heart! There's not a single present wrapped here either! I think tomorrow we'll need to bite the bullet. But in the meantime, I need some more sewing machine therapy, waiting out my daughter's labor is excruciating! That baby really doesn't want to be born before Christmas lol!

I'm hiding from wrapping, too. I think I'll just hold their present behind my back, then say 'here ya go' and hand it to them...

I love the Confetti blocks! What a difference a colored background fabric makes with a similar layout! The fact that you used scrap triangles makes it even more special.

That confetti waves is a good looking project! You've given me all kinds of ideas! (Like I need more ideas...)

Ocean Waves has been on my to do list for a couple years now. I look forward to seeing more of both! Happy Christmas!

LOVE that confetti waves . . . adding that one to my someday list!

p.s. the only reason the wrapping is done here is that we are doing an early Christmas this afternoon with elder son/DIL/grandson before they fly off to her family's house for the holiday itself. (I did the wrapping yesterday afternoon . . . none too early)

Ocean Waves is the first quilt I can remember seeing and wanting to make (still haven't done one!) but I like Confetti Waves even better.

I have no objections to wrapping presents. Using up all the wrap and ribbon on hand is like trying to use up every scrap of fabric.
Your confetti waves are super! I look forward to seeing how the entire quilt turns out. Merry Christmas to you and your family!

Making Waves is so cheery to me on this dreary day of icy driveways fraught with danger for my guests on Christmas Eve. But the news and the weather reports were very encouraging, so I expect I'll live another day.

I always love Ocean Waves but especially like your red ones. Great idea to use red and waste triangles.
Merry Christmas.