Where Did Those Blue 2.5 Inch Scraps Go? 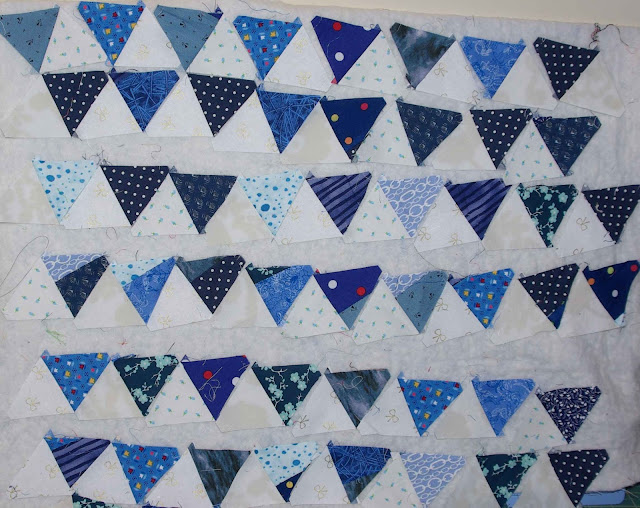 The color of the month for the Rainbow Scrap Challenge is blue.  I'm still trying to clear out my 2.5 inch blue strips of scraps.

This week I made some triangle units for a pyramid quilt.  I actually did cut some fabric for these - 3 2.5 inch strips of neutral fabric is all.   I then looked for any scraps that might be enough for at least one triangle and I sew all the blue 2.5 inch pieces into a strip about the width of the neutral strip.  Then I follow the directions on the Molly Flanders blog to make the units.   In just a few minutes you have a bunch of triangle units.  At the end of the year the units will be sewn together.

When I sew the blue pieces together I get some split blue triangle parts like you see in the fourth row.  So nothing gets wasted. 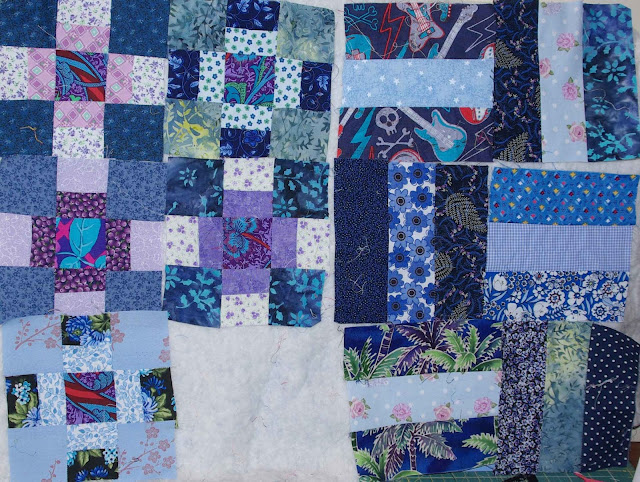 I participated in a floral themed Chunky Churn Dash swap last year and I still need quite a few blocks to complete a lap quilt.  So I picked out some floral themed blue 2.5 scraps and picked through my 1.5 scrap bin for some neutral/blues/purples (RSC highlight color) to make a few Chunky Churns.  Then I found pieces enough for dark/light/dark rail fence pieces. 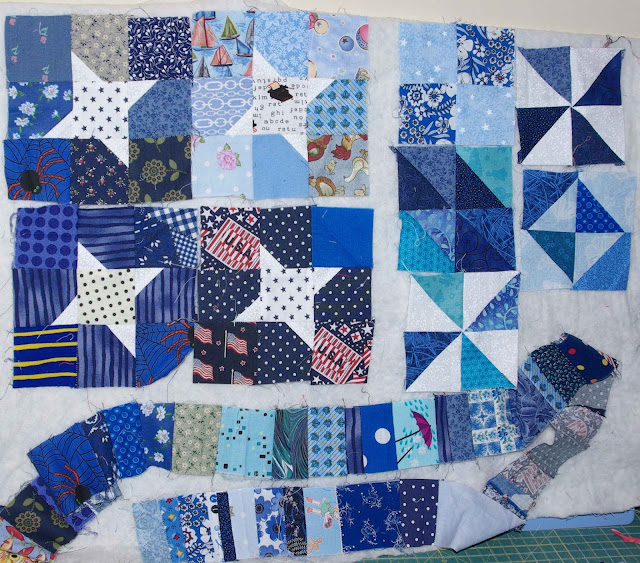 Other blue scraps went into six inch Twinklers and some miscellaneous 4 inch blocks.  Then when all was said and done I sewed all the 2.5 inch scraps that were less than 2.5 inch square into one big long strip. I'll decide what to do with that later...Chinese Coins?...a border?...combined with those 4 inch kitchen sink blocks?... 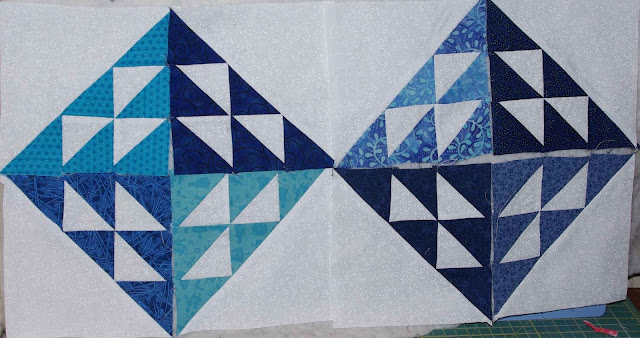 I used some scraps to make 8 six inch January Block Lotto Birds in the Air blocks. 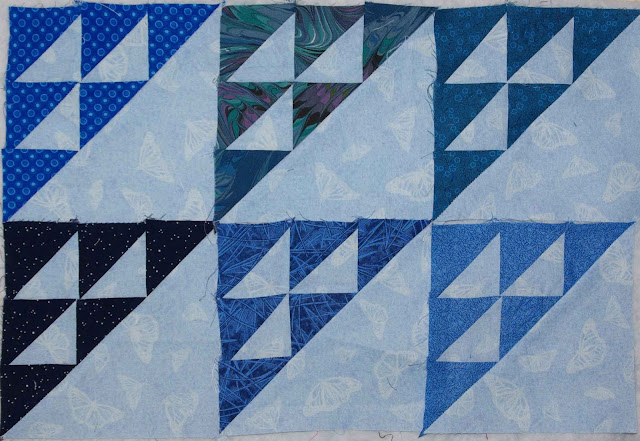 And still in my 2.5 inch scraps...I made six more Birds in the Air blocks for the Old MacDonald Mystery Sampler - a Block Lotto mystery.  I thought I wasn't going to make any more mystery quilts or samplers (other than finishing the UFO samplers I have in my midst) but this Old MacDonald sampler sounds rather intriguing.

Ok...so, my 2.5 inch scraps are about gone. I saved out the tone on tones to make some little butterfly blocks and I saved out 3 long strips to make an actual block but other than that...I'm about finished this month with the 2.5 inch scraps.  Next week...4.5 inch blue scraps are on the agenda...and maybe some crumbs or...

Got Scraps?
Use up the blue ones this month and join us with your progress each ScrapHappy Saturday.

Wow - you sure managed to put together a lot of blocks/parts with those 2.5" scrappy blues!

Wowzers! And I thought I had a lot of different blocks going! 8)
Love all the blues and can't wait to see what's next!

That's a lotta blue! Love your technique of stitching strip ends together to make a WOF. It gives your triangles more interest.

So many blue blocks you were able to recreate.

Lots of lovely blue blocks. Awesome job using up your scraps. Keep up the good work.

Holy Moley, Cathy! When do you find time to work and sleep? I thought I was doing good, but you never fail to amaze me! I love all your blocks. Now I am on a mission to get rid of my blue scraps. Every single ort.

I love your Birds in the Air blocks, they look beautiful!

Wow! All your different blues and blocks are so fun to see! I really like the white twinkler stars with the blue backgrounds.

So many different blocks, and so beautiful blues.

Great blocks, especially love the birds in the air. Thanks for the link to the triangle/diamond tutorial...just what I was looking for as I started playing with my ruler this week, thank you!

Look at all those pretty blues!!!

Wow! So many blocks you've made this week. Great scrappy piecing.

You have a lovely collection of blue projects all started!

You make such colorful cheerful quilts. It was a joy to scroll through your blog. Nice job!

Whew! I am out of breath from just reading what you got done. Are you still alive? Love all the blues.

Wow! you have accomplished a LOT! I like your plan of working your way through the different sized scraps.

So many blocks! I really like your idea with the blue triangles. Very effective!

What a great collection of blocks you have going on. When I read your blog I always think I should be better organised and sort my scraps by size too.

That's a lot of scraps turned into blocks - great job! Particularly like the pyramid blocks (which look like bunting at the moment), thanks for sharing the link to how to make them :)

Oh my gosh Cathy, you just provide so much inspiration. Whenever I need a good idea for a quilt I just need to visit you!!!

I hope we both win Block Lotto this month too!

Wow! Such a feast of scrappy goodness! Thanks for the eye candy!

Wow, so much can be done with our scraps! Just loving all the blue here (my favourite colour.)

That's a lot of blue scraps! And to think there's more...! Keep up the good work, that's all I can say!

Beautiful blue blocks. I loved all the variety of fabrics in your colletion.

Wow! You really did a number on the 2.5" scraps! You made some fun blocks with all those scraps.

I LOVE all your blue blocks!! The long narrow strip of blue scraps looks interesting : )