I Participate Too Much!

My name was removed from some of the RR waiting lists over at Crazy Quilt International because I evidently participate too much according to new rules made. Their theory is that if you are in too many (3 in the list owners' judgement) RRs your work will suffer. I have news for them. I've participated in many RRs. The same people who are late mailing blocks will still mail blocks late. There are people who are just that way. I've been in RRs with people who participate in just 1 RR and can't get their blocks done on time.

Then there are those people who just plop trinkets on blocks and do very little stitching and always will and call it their fair share. You learn to avoid RRs with those people. I think those specific people should be addressed in private about this. I would want to be if I was one of those people. They probably don't think they are doing anything wrong if they have done it in RR after RR and gotten away with it.

At any rate...I don't like the new rules and although the group moderators believe them to be fair I don't. It is their list and they can make their rules. I do agree with that.  I think; however, that the offenders that caused the new rules to be made should have been privately emailed first as to their problems. If I was an offender I would like to be advised of it myself.  So after I finish up my blocks in each RR I will not participate in RRs on CQI anymore. That will leave me more time to do my own thing. So that may be a good thing. 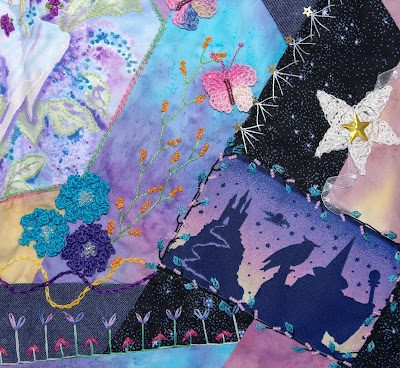 This is my work on Lorrie's Midnight Fantasy Garden block. Lorrie has always made her blocks bigger than the rules called for. This one is gigantic- outside the rules.  Anyway... the silky was already on the block. I stitched feather stitch, leaves and bead flowers around it. I crocheted butterflies, flowers and a star and plopped them on the block. I added a "star studded" seam, buttonhole stitch flowers, curvy chain stitch seam and motif of feather stitch with french knots. It is difficult to decide what is a fair share of the block to complete when it is so big. 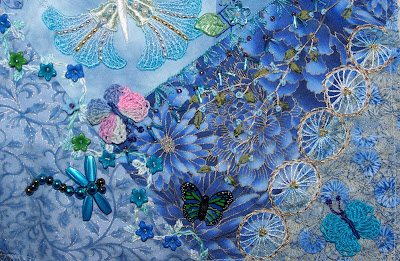 This is my work on Arlene's Butterfly and Dragonly block. I had to add some beaded seams to go with the rest of the work done on the block. It doesn't show well but next to the pink tinged crochet butterfly is a seam of buttonhole stitch further embellished with bead flowers. Below that is feather stitch motif of metallic antique effects in gold because many of the fabrics in her block have gold accents. Blue silk ribbon french knots and green silk ribbon leaves finish it off and a butterfly button sits below it. Buttonhole wheels of variegated blue perle cotton outlined in metallic antique effects is done on another seam above another crocheted butterfly. Another seam has chain stitched curvy seam with leaves and flower bead buttons added to balance out all the other flower beads on the block. And, finally, I added a beaded dragonfly. 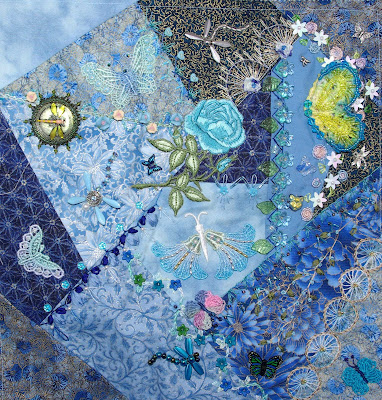 This is Arlene's block after Kathy, Candji and me. There is a little room left for Meg, the last stitcher. 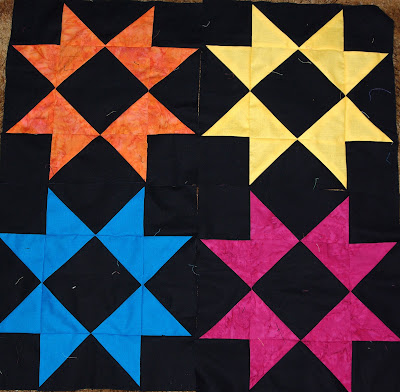 All the sane Yahoo Quilt Groups don't limit participation so guess you will see more sane quilting here in the future. Above are some Starz blocks for a swap over on Mailblocks Yahoo Group.

Now, with my lack of participation I will probably make more charity quilts, teach the grandkids sewing/embroidery/crochet and other life skills, catch up on scrapbooking and genealogy notebooks and reading, garden (weed) more than usual and do some doomsday prepping.

At the risk of sounding dumb, what is an RR?

Cathy, as usual your work is just lovely. Sad to see you leave the rr rotations as your work is always so pretty. I have enjoyed seeing what you create for people. Your sane quilts are nice as well.

You have done some beautiful work! I definately understand your frustration and am saddened to read that you are moving on to other areas.....although, charities lookout cuz "here you come"!! :) I look forward to seeing what your g'kids come up with in their projects!

Hi Cathy, I too understand your frustration, and wanted to make you an exception to the rules. You are the one person that we could always, ALWAYS count on. But that was not my call to make.

And for the record, we have written and/or spoken to the main offenders of 'Lazy Quilting' as I call it. The ones who slap on trinkets and call it CQ. That in itself was an education process, because a couple were defensive and even angry that that they couldn't just do their thing!

The new guidelines actually call for a minimum amount of embroidery. Those who cheat will be booted. It sounds mean, but we hear all the complaints behind the scenes, and we want the majority of stitchers to be happy.

You will be so missed in the RRs, and I hope at some time you will reconsider. PLEASE stay in the group and share all your lovely eye candy with us.

I am doing a lot of sewing and quilting (sane quilting) this summer, so I know I will be watching your blog.