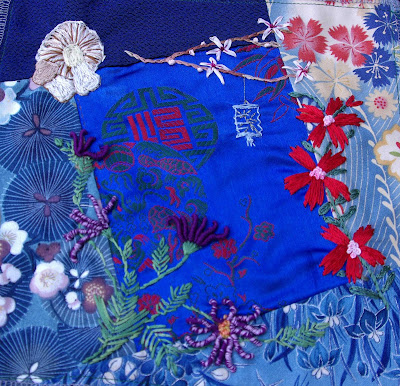 This is Rita's block from the "Anything Goes" CQ RR. Rita chose an Asian theme for her blocks. I'm not much for the Asian theme but since I've been doing an Asian challenge for another list which will turn into a pillow for my sis, this block came along at just the right time since my brain is in Asian mode. I used bullion stitches to make what are supposed to be spider mums. I used 4 strands of DMC. Sometimes all four strands were of the same color and other times I used two strands of two different colors. The red flowers on the right look like pinks to me but they are supposed to mimic the flowers in the fabric there. I used satin thread and satin stitch to make those. The upper left is supposed to be a couple of mushrooms - the one to kind of mimic the design below it. I used some satin and some DMC to make the mushroom motif. And finally...I made a branch with some cherry blossoms and a little lantern hanging from it. 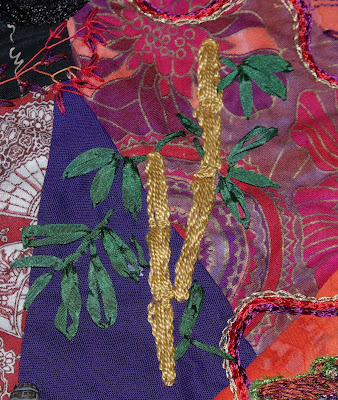 This is my bamboo motif on my Asian pillow block. I used perle #8 for branches and silk ribbon for leaves. 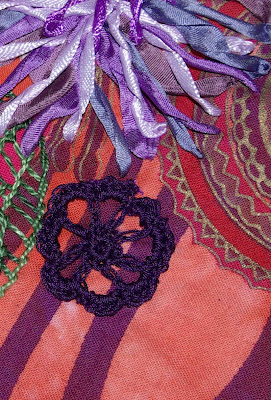 This is supposed to be a dharma wheel. I crocheted it. 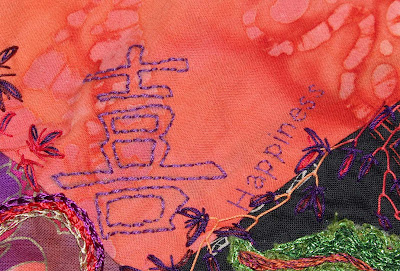 These are my week 5 raised closed herringbone stitched leaves. I need practice; however, I think I really like this for leaves and it's really not as difficult to do as I thought it looked. Thank goodness for challenges. 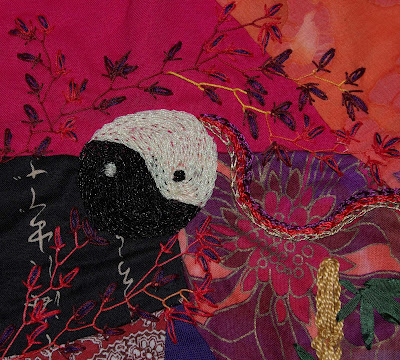 This is my ying/yang motif. I used some metallic (or was it called pearlescent? at any rate it wasn't too difficult to use) thread and stem stitched it.
And speaking of Asia...I think my brother is in China right now. He goes off on trips by himself to take cooking classes all over the world and never really lets anyone know when he comes and goes. I just get an email once in a while out of the blue that tells me where he is. He's a chef in Florida and since business is slow in the summer he travels during that time. He used to be addicted to cocaine and Jack Daniels quite some time ago but he's been off all that kind of stuff for quite some time and says travel is his addiction now. Thank goodness!
Posted by Cathy at Wednesday, July 27, 2011