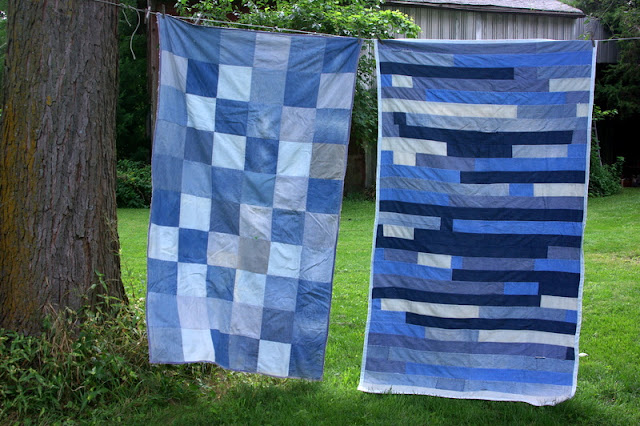 Old blue jean quilts from the early 80's.
I keep these in our camper now.
They had to get a good washing because they were sticky from S'Mores.
So since they were out on the line I thought I would tell you about them.

They are over 30 years old and still in use. 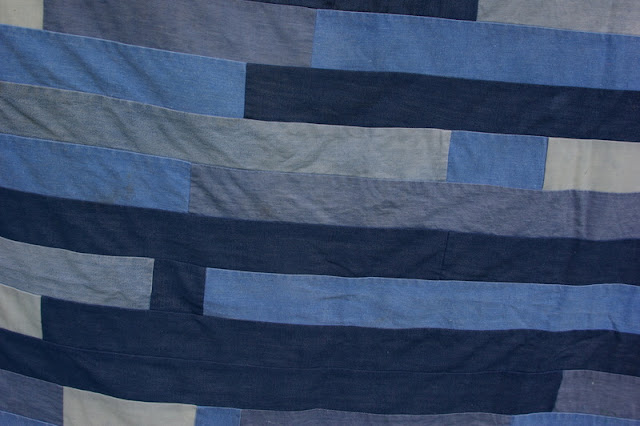 In 1979 we moved back to Iowa from Florida. We had two kids then and our first winter back in Iowa we didn't have many blankets (or winter coats or boots).  And we didn't have much money to buy any.  I did have a lot of old blue jeans so I made a couple of twin sized quilts for the kid's beds.   This one I used the longer strips from the legs and just sewed them into long strips and then sewed  them to an old sheet using the sew and flip method.  I didn't have enough money for batting but these quilts ended up heavy and warm. 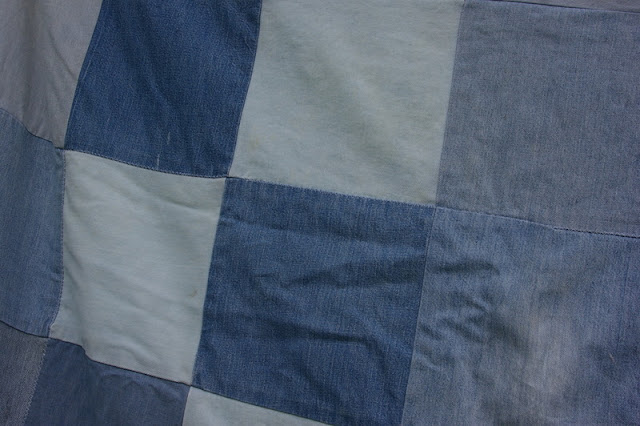 The other one was just large patches sewn together and then sewn to an old sheet with a sort of stitch in the ditch approach. 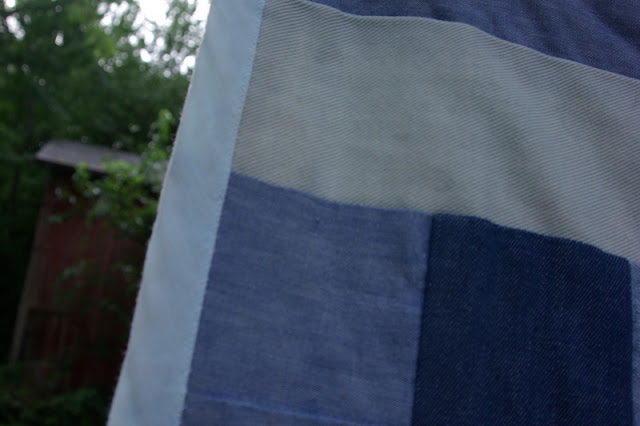 I actually used some wide purchased seam binding from the thrift store and zigzagged it on.. 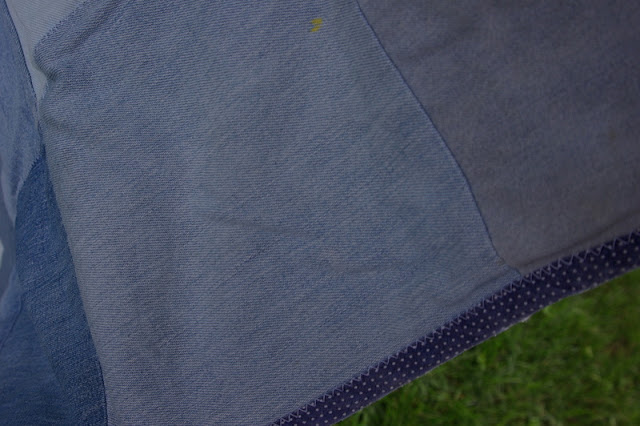 This one just has regular seam binding - not wide - and it is starting to fray.  I guess my love of polka dots goes way back. 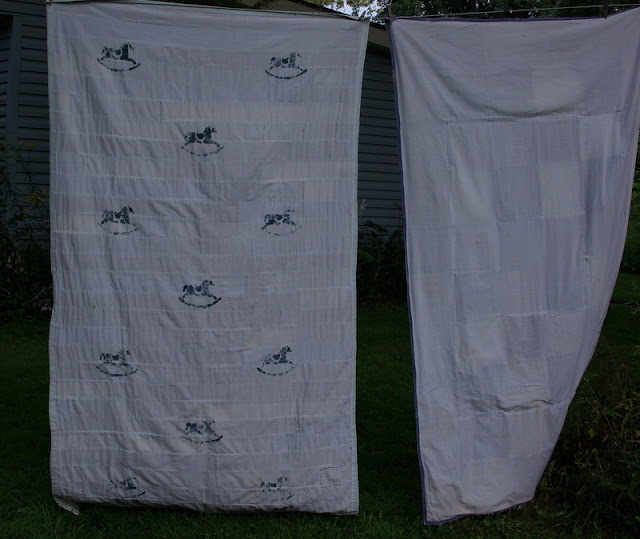 You can see on the quilt with four patches that I didn't even sew it all around in the ditch but just around the middle four by six patches.   On the strippie one I stenciled some rocking horses. I was practicing for stenciling on our stairs.

After all these years those old sheets have held up just fine as a quilt backing.  And that is why I still use sheets now and then as backings. 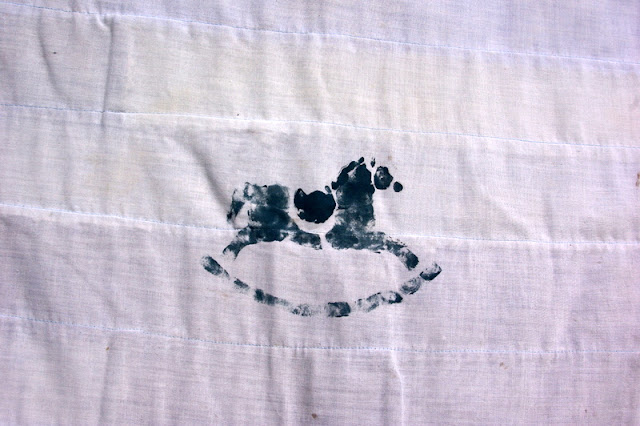 Somewhere along the line I started taking the quilts camping....first tent camping and then in our pop-up camper and now in our fancy new RV.  One year we were camping a strong wind (almost tornado force winds) tore out the sides of our pop-up camper in the middle of the night and we quickly packed up what we could and left the campground.  A year later I could not find the quilts and thought I had left them at the campground or that someone had taken them.  Turns out my brother-in-law, camping in a nice RV, picked them up after we left as well as some of our other things but just never told us about it for a couple of years. 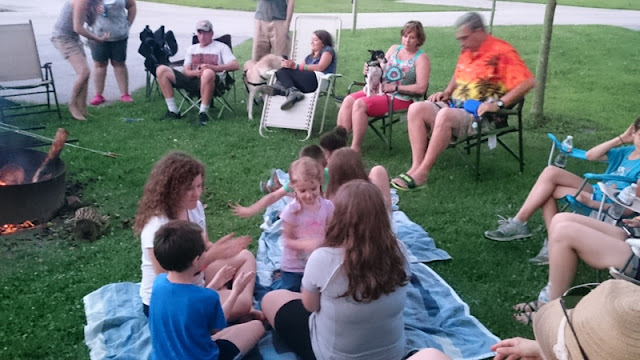 It seems at the family reunion camp outs there are always lots of kids (my husband has seven brothers and sisters who each have between 2 and 5 kids who each have between 0 and 3 kids) but never enough chairs around the camp fire so I always put out the blue jean quilts for extra kid seating.  Here is only a small group of the kids playing hand clapping games while waiting for time to roast marshmallows.   No, I'm not pictured.  But I did have a S'More.  It tasted as nasty as I remembered. I say that every year after I try just one.

How many memories those denim quilts conjure! Looks as though you've had a great reunion. Here's to many s'more!

Love your quilts. I've been collecting jeans from a friend and hope to start one in a few months. I have only made a few quilts but they all have backings from a sheet or duvet cover. I always buy them from the charity/thrift shops here in the UK and have bought over 100 new/as new covers in the past 2 years :) ...and curious - what is a S'More?

Lucky you got them back. That's a great memory/story. Your trips sound a lot of fun... Even the wind storm one

LOL, what a great story, Cathy! How wonderful that they are still holding together, and probably nicer than ever as the denim softens. And I love how they disappeared and returned to you. I hope you all will be enjoying them for quite a while longer!

I've been saving our old jeans for a while. What beautiful color variations. All these blues. And how many memories - both the original owners and the years of use. Congratulations!
Hope you enjoyed the rest of the reunion... after the s'mores.

I've always meant to make a denim quilt and now I really feel the need--lol! I agree--s'mores are overrated, although I have been toying with the idea of using fudge stripe cookies in place of the graham crackers and chocolate bar---hmmm...

I love those old quilts and their stories. Thanks for sharing.

Great memories, thanks for telling the tale of two quilts!

I know how you felt! Denim has a lovely weight when you are feeling properly cold and, as your quilts prove, it lasts really, really well. I love that you are still using them for family gatherings too.